The precariat is a term used to describe a section of the working class defined by its precarity, specifically around labour-related insecurity. Precarity is nothing new to labour, but its rapid growth since the 1980s aligns with the rise of neoliberalism and increasing demands for flexibility that comes with globalisation. With the release of Guy Standings The Precariat: The New Dangerous Class in 2011, there has been robust discussion around whether the precariat is in fact, a 'class-in-the-making, if not yet a class-for-itself' (Standing 2011, p.7). This dispute is mainly revolving around the fact that there is no fundamental conflict between precarious workers and others in the working class or a change in their relationship to production. However, this article won't delve into this specific discussion, and will discuss the precariat as a socially excluded group within the working class, provide evidence of this social exclusion, and identify the systemic, structural and global transformation impacting this group.

The precariat is defined by those in a state of precarity, of insecure income, and employment. Casualisation of labour, agency labour, temporary work and the gig economy can all be examples of precarious work, but the insecurities extend to all workers. These issues are fuelled by austerity measures where inequalities, homelessness, unemployment and poverty have grown while wages have fallen (Standing 2014, p.34). The nature of the precariat is that it is not homogenous, and everyone can fall into precarity.

Multiple insecurities make up a web of precarious experience for those in the labour market. Guy Standing lists seven forms of labour security under industrial citizenship that help us define a section suffering from precarity; labour market security, employment security, job security, work security, skill reproduction security, income security and representation security (Standing 2011, p.11). Standing states that employment insecurity, the ability to retain employment, has been where the most attention is given regarding precarious work. However, job insecurity, the ability to retain a particular niche job, is also a defining feature. Precarious work is identified by those at the edges of these areas of labour security.

Globally, debt has risen with low-income earners who overspend becoming a structural feature of market economies, while social provision by the state has decreased (Standing 2011, p.61). In OECD countries, temporary and casual jobs have become the norm, and this flexibility of labour has created such things as contractors that work for one primary employer, crowd-work, unpaid interns and other insecure forms of work (Standing 2011, p.70). In Australia, there has been several ways that workers are moved to non-standard insecure forms of work. Sacking and re-hiring of workers as independent contractors, multiple short-term contracting, the replacement with part-time workers, to name a few (ACTU, 2018). About 40% of employment in Australia is non-standard (OECD, 2015). The Foundation for Young Australians noted that linear career progression is becoming a thing of the past and that young people will have 'seventeen different jobs over five careers throughout their lifetime', calling for policymakers to support the development of enterprise skills and portability of those skills across occupations (FYA, 2017). The nature of work is changing, with the risk being placed back onto the individual rather than the employer.

Standing talks of the composition of social income being broken into six elements: self-production, income from labour, community and family support, enterprise benefits, state benefits, and benefits from savings and investments (Standing 2011, p.11). Precarity can be impacted by restructuring in these areas, leaving workers with a higher wage, but lacking support in other areas that would benefit them in times of need. This exclusion has them feel alienated from the solidarity of a labour community and susceptible to opportunism (Standing 2011, p.12). This erosion of non-wage income has helped define the precariat (Standing 2014, p.86).

In Australia, the Liberal-National Coalition under John Howard brought in the Workplace Relations Act 1996, which imposed limits on union activity and restricted the scope of the Australian Industrial Relations Committee. This led to a raft of changes directly approaching social income, such as reducing awards to only 20 matters, individual contracts and the re-introduction of fines for illegal strike action. Howard followed up in 2005 with reforms that limited protected action. They did this by imposing complicated requirements and limiting what protected action workers could take while ensuring that unprotected action was regarded as unlawful (Romeyn 2008). At a global level, the World Bank, the IMF and OECD have been instrumental in attacking growing unemployment by removing workers' protections with the argument that it will create jobs (Wilson 2013). These types of attacks on collectivism are defining features of the neo-liberal project (Standing 2014).

Standing argues that young people see unions as protecting privileges they will never have (Standing 2011, p.78); however, he does not delineate between forms of unionism. This is a crucial aspect in his work as he argues that the precariat needs a collective Voice and a new collective body (Standing 2011, p.167). Representational security is a significant aspect of the traditional strength of the working class. As labour has developed so too, have unions, moving from what can be defined as base unionism, where workers come together to represent themselves and their interests against management without mitigation or negotiation by a third party, to service unionism that utilises paid officials and hierarchies. There are many critiques of service unionism and alternatives, such as the organising model (Barnes & Markey 2015) and the rank and file organisation (Hyman 1975). Indeed in the gig economy, we see precarious workers organising themselves using base unionism to improve their conditions via direct action in their workplaces, for example in Deliveroo drivers organising in the UK (Leftcom 2019) and 6000 Uber drivers joining an anarcho-syndicalist union in Indonesia (It's Going Down 2018).

In his work, Standing argues toward a collective action by the precariat and puts forward the model of worker cooperatives (Standing 2011 p.168). He argues the difficulty of integrating social services around the value of labour (Standing 2011, p.169) as being a barrier. Standing argues his position for a number of reforms, the most notable being a Universal Basic Income (UBI). This area of Standings work requires more investigation, particularly in its comparison to the argument for Universal Basic Services (UBS) rather than income, to which Standing makes no mention. This omission seems glaring given that arguments against a UBI are based very much around the ability for it to abused under neoliberalism as a method of worker control that can drive down wages and conditions. Giving everyone money to afford services appears on the surface built to maintain capitalism rather than approach precarity, where a UBS is giving free services based on need. The concept 'from each according to their ability, to each according to their need' is not new, and one form of support does not preclude the other. Both these potential approaches have various models that could be investigated or combined.

Leftcom. 2019. The Self-Organised Struggle of Liverpool Couriers Highlights the Difficulties of Organising in the 'Gig Economy'. [online] Available at: <https://www.leftcom.org/en/articles/2019-12-02/the-self-organised-struggle-of-liverpool-couriers-highlights-the-difficulties-of> [Accessed 2 May 2021]. 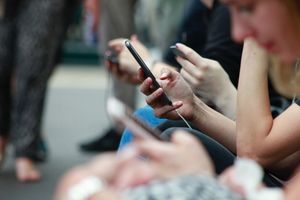 The Unseen Teen: The Challenges of Building Healthy Tech for Young People Registrations for the 2021 Tasmanian Youth Forum are closing soon

Youth Network of Tasmania is hiring!